My family is from Lamar County, Alabama. My grandmother owns land that once belonged to Rube Burrow, the infamous Alabama Outlaw from the late 1800s. Growing up on that land, I heard the stories of Rube Burrow and it really sparked my love of history. As a kid we would play cops and robbers and of course Rube was a big part of those games.

We always wondered if there was gold buried on our land but of course we never found any. It was just the wild imagination of young kids but it served for many good times.

My grandmother would take me as a kid to see his grave in Fellowship Cemetery in Vernon, Alabama. It was very exciting for me to see this. I enjoyed reading about the Wild West but that seemed so far away. Rube is buried in my hometown and that brought it to life. 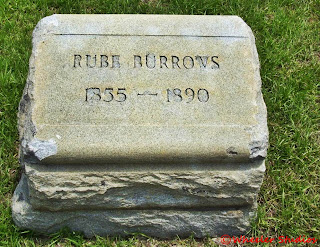 I would always read any book that I could find on Rube. Pictures were always a plus. My most favorite picture that I have spent many many hours looking at and studying is the pic that was taken in Birmingham, Alabama. It shows Rube in his casket with his guns and hat in there with him. He was taken off the train that was taking him back home to Lamar County, Alabama and stood up for this photo while thousands of people came to view the body of the most wanted man in the country.  This fasinated me as a kid. I loved guns at a young age and I always wondered what happened to those guns that were in his coffin with him.

This is the picture that I spent so many years looking at. 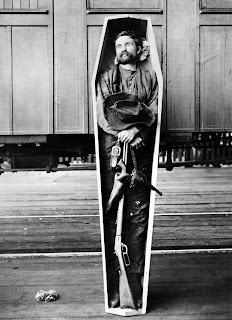 You can see how this picture would be so facinating to a young kid. Its everything the "Wild West" is made up of and this Outlaw was from my hometown and is buried just down the road from where I was born.

I wondered for years what the guns were and after studying them I found out. The rifle is what interested me the most because he loved that rifle so much that it basically got him killed.

You see, when he was captured Jeff Carter took his rifle and upon escaping Rube (instead of leaving right away) decided to go find Jeff Carter and get his rifle back. A gunfight took place and Rube was killed. Had he just ran away he may have escaped and possibly lived longer. He choose to get that rifle back though and paid for it with his life.

I started a love affair with that rifle as a boy that I still have today. Now with the internet and things I was able to find out that the rifle is still around today and that I could view it. Heck yes I thought. I made plans to go see the rifle for myself. I had looked at this rifle for so many years in that infamous picture and now I was going to stand there and see it in person. Of course I was going to snap a few pics of my own. 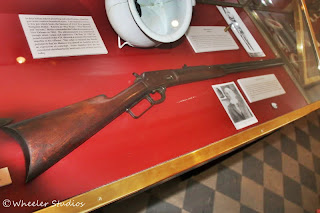 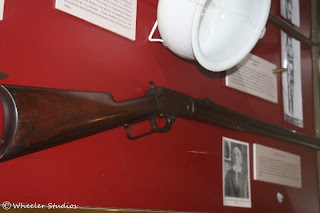 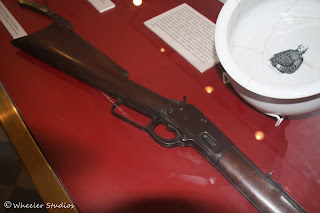 There was even the last bullet that was left in his revolver. It was taken from the revolver after the gunfight that killed Rube Burrow. I thought that was pretty neat also. 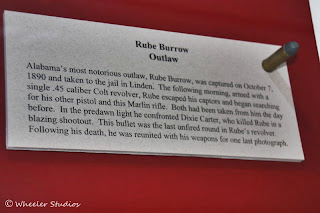 Of course no Rube Burrow road trip would be complete without seeing the old courthouse that Rube was killed in front of. It is still standing today. 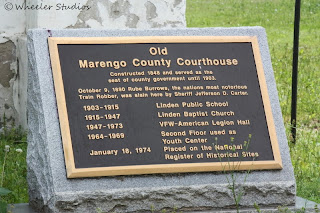 If you would like to learn more about Rube Burrow google his name. There are plenty of things that come up.

To me, Barbara Woolbright Carruth, is considered the leading Rube Burrow Expert. She has a book about him also.

I collect anything I can find on Rube Burrows so if you have something please email me at JWheeler331@gmail.com

I love newspaper articles, wanted posters, pictures, books or just ANYTHING on him.


Thank you for reading, please feel free to comment.

PS. I know his name is spelled both ways as in Burrow and Burrows as written on his headstone. The correct spelling is actually Burrow.
Posted by JWheeler331 at 9:19 AM 2 comments:

JWheeler331
Hello and thank you for checking out my blog. My name is Joe. I enjoy history, shooting sports, photography, Outdoors etc. I sometimes write about things that I like and find interesting.